Twenty Ural motorcycles with sidecars paraded through the Sochi Winter Olympics opening ceremony. That was a free, huge advertisement for the Russian firm, since the bikes had been bought by the organizers. Ural is a private owned company since 1992, selling motorcycles all over the world.

The Ural motorbikes and sidecars are still made in the original (now-ex) Soviet military factory in Siberia. While the machines have received updates over the years, they're based on a pre-WWII German military design (BMW). This year they got EFI, disc brakes on all three wheels, hydraulic steering damper etc. Now, isn’t that a revolution? 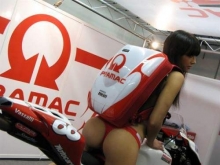