The 2015 Kawasaki ZX-6R and ZX-10R Ninja Anniversary editions were introduced in USA.

These two bikes are the 30 years anniversary variants as the first Ninja 900 was introduced in 1984, that means 30 years ago. However these special 2015 variants get only special 30th anniversary graphics, lime green rear springs and the price is $300 higher price than the standard Ninjas, ABS or standard. The two anniversary editions will be available in USA, it is not yet known about Europe and other markets. 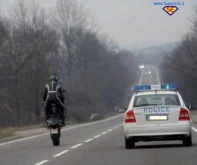