Honda is planning a retro scrambler according to a patent application

It seems that the retro scramblers could be a trend of the future as Ducati and Honda are planning new bikes in this category which was common before the advent of the off-road specialized motorcycles. There were some spy shots of the upcoming Ducati bike in the past.

Honda however has just issued some sketches in a patent application outlining a taller street bike with a round headlamp and hand guards, high rising muffler, spoked wheels and comparatively small rotors at the front, indicating some off-road capability. The engine could be anything bigger than 500 c.c., four stroke one this time. Will this bike make it to the showrooms one day reviving the nimble Honda Elsinore of the seventies? 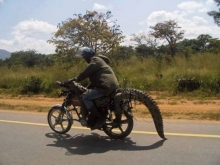