Touring with Che Guevara in Cuba will be an option shortly!

The youngest son of Che Guevara called also Ernesto, launches a motorcycle touring business in Cuba this month which will be called “Poderosa Tours”.
The Poderosa derives from the name that his father was calling his Norton bike, that ownership was highlighted by a motorcycle tour in South America in 1952, a journey made famous from the movie “The Motorcycle Diaries”.

Ernesto Che Guevara is a lawyer and a Harley Davidson lover, his favorite bike is a 1960 H-D PanHead 74. The motorcycles provided for the trip are also H-D on six or nine days tours with prices starting from $ 3000 (2450 Euros). 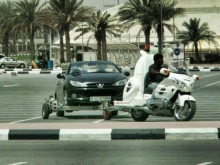