The following paragraphs except from Comments, derive from Honda’s press release.

Concept: The 125 c.c. bike category is not an ordinary one. These motorcycles must be just as rewarding to ride as bigger Supersports machines, particularly where engine power is less important, such as in town and on very twisty roads.
They should be practical in travelling today’s congested urban roads, while reliability and low maintenance are all-important. But while its small size is an asset in many instances, guaranteeing easy handling, a low weight and the ability to slice through urban traffic, the demand has emerged for a 125cc machine that is in every way a full-sized sportsbike.
The brief was simple: to create a 125cc sportsbike with the look and feel of a bigger and more expensive machine. The new sportsbike had to retain the current CBR125R’s user-friendly handling characteristics and free-revving single-cylinder engine, but package them inside all-new bodywork with the sophisticated styling and full-size proportions demanded by the modern young sports rider.
It was decided too that wider, more impressive wheel and tyre sizes should be specified, enhancing handling while also helping create the feel of a much bigger motorcycle.

The cbr is equipped with a powerful, reliable and fuel-efficient 124.7cm3 liquid-cooled, single-cylinder engine with PGM-FI fuel injection, delivering 9.38kW at 10,000rpm and a peak torque figure of 10.1Nm at 8000rpm. Tank range is increased due to the 13-litre fuel tank. The latest advances in fuel injection and catalyser technology would make the 2011 CBR125R more efficient than its predecessor.

Despite its slightly larger overall dimensions, the 2011 machine remains easy to handle, immediately giving new riders the confidence they need.
Key to the CBR’s manoeuvrability is its riding position, which is designed around the low 793mm seat. Consequently the comfortable yet involving riding position and low kerb weight (136.9kg) make for a very manageable and easy to handle 125cc sportsbike.
Also the lightweight diamond twin-spar steel frame with sporty geometry for intuitive and exciting handling.
The wheelbase is one of the shortest in its class at just 1313mm, ensuring the CBR125R flicks through bends with fluidity and grace. However a trail figure of 90mm means this increased agility never threatens to cause instability.
In short the CBR125R is ready for anything, from super-smooth open roads to the traffic-packed and bumpy challenge of the city. A 31 mm fork is used at the front.

The 2011 CBR125R uses tyres and wheels of a size more commonly associated with the 250cc class. The lightweight new 100/80-17 front and 130/70-17 rear cast wheels use a striking five-spoke design. They also underline the CBR125R’s full-sized credentials – this is a serious motorcycle.

They are slowed by equally powerful braking systems, disc brakes front and rear. The front brake uses a 276mm disc gripped by a twin-piston caliper, while at the rear a 220mm disc and single-piston calliper.

The advanced multi-function digital instrument display is new, as well as the full fairing cowl. The fairing also features a powerful one-piece headlight.

Few extras are available, very similar to the 250 c.c. bike, including a carbon-look seat cowl, a rear seat bag, tank pad, wheel stickers and a U-lock, designed specifically to fit under the CBR125R seat.

Comments: The previous cbr 125 r that was launched in 2004, was a really small build bike, thus it’s a great improvement that dimensions are back to the category standards, once more. That was thoroughly described at the cbr review, from www.moto-choice.com.      Differences in engine performance are expected to be negligible. Combined with the slight weight increase and wider wheels, it may affect the total performance of the bike…      Differences in steering geometry are little. Consequently, the increased dimensions of the bike, may result in a very different riding feeling.      Τhe resemblance with the larger brother of 250 c.c., maybe is not really coincidental. Whether future buyers like the VFR1200 design or not, which is the key design for the CBR125&250, its really a subjective factor.      A sister bike is also build , the new CBR150R which is designed to meet Asian regulations. Apart from the 25 c.c. difference, the two bikes are identical.

Link for the outgoing model test 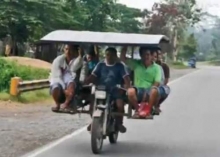