An official video of the Honda CB500 range.

2013/1/31. An official video of the Honda CB500 range. The first spy photos were shoot during this footage!      The sales of the new bikes (suitable for the A2 riding licences) will commence in March.

This make the Honda bikes very competitive in terms of pricing not only to other Japanese manufactures, but also initiating internal competition. Thus the CB500F costs about the same with an SH300i scooter, and the CB500X is £1000 more expensive than a single cylinder CRF250L.

Compared to the other manufacturers the price of the CB500F is about the same with Kawasaki KLX 250 and Ninja 300, somewhat more expensive than a Yamaha X-max 250 scooter and £1000 cheaper than a Yamaha XJ6.

Obviously some manufacturers are adapting quite fast to the globalised requirements of the new era. OK the top of the range bikes bring prestige to the manufacturers, although it seems that the least expensive motorcycles can be the most profitable for them, if of course they will be sold on large numbers around the globe. 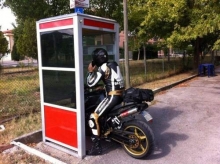