The FIM World Motocross Riders do the Harlem Shake during the first round of the 2013 Season in Qatar.


Following the Ktm version, which just broke in! Here, the KTM athletes Ken Roczen, Andrew Short, Ronnie Renner, Mike Brown and more get down to the Harlem Shake! 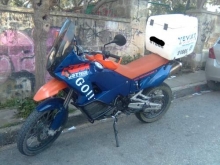