This helmet replicates the one worn by The Doctor at the Valencia winter test sessions late in 2012 and during the Circuit of the Americas (COTA) track in Austin, Texas, when he rode once more the M1.


Apart from his usual Sun and Moon graphics, Valentino also chose to have an ideogram for the Japanese word “Kando” on the back of his Pista GP helmet.

This word is used to indicate an intense emotion, such as that felt when seeing something exclusive, deeply satisfying and intensely exciting.

The word was first used by Masao Furusawa when Valentino arrived at Yamaha in 2004 and the version seen on the helmet was designed by Masao’s wife.

This highly unusual graphic will be available as a limited edition on the Corsa model only. 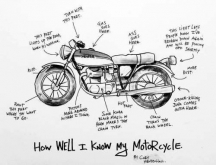