Updated: 2014 Kawasaki ZX-14R Special Edition for the US, ZZR 1400 Performance Sport in Europe.

A 2014 special edition of the ZZR 1400 will be available in USA and Europe.
The US variant will get Ohlins suspensions, especially the shock will be a TTX unit.

A grippier seat and black rings around the clocks are also featured.   The white colored bike with those gold  flames looks rather weird, although it could be much nicer live.

The European version is named Performance Sport. Except from the Ohlins suspensions a pair of Akrapovic silencers has been mounted and a bubble screen.

Minor tweaks here compared to the 2013 bike. The intelligent ABS and a speed-acceleration sensitive Ohlins steering damper are the two upgrades introduced in 2013. 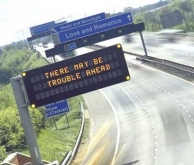