The four cylinder 1043 c.c. engine delivers 142 PS/10000 rpm and 11.3 kgm/7300 rpm (81.73 ft lbs) torque. Hence the engine is the same with that of the previous bike, providing slightly higher output though. A 41mm fully adjustable inverted fork is featured at the front and a shock adjustable to rebound damping and spring preload at the rear.


This could be a leaked photo of the upcoming Kawasaki naked. The engine could be a ZX-10R, rather detuned variant. The bike should be unveiled at the Eicma motor show next month.

According to the latest information the new Ζ1000 will boast a much more aggressive character compared to the previous models and the latest version which was just three years old.
It is expected to be a naked version of the ZX10R without the fairing, with the engine just slightly detuned. The bike will compete with the Aprilia Tuono V4R and the upcoming naked Bmw S1000 RR.
Τhe frontal section of a fairing may be seen also on this Kawasaki naked. The nose will feature four small LED headlamps. More, at the Eicma motor show.

Updated: The new Kawasaki Ζ1000 will be unveiled by November 5th!

According to the latest information the upcoming Kawasaki motorcycle which will be unveiled on November 5th, will be the new Z 1000. This bike has been designed by the “clean sheet” method.

The all-new Z will be unveiled at the Eicma Motor Show. The styling is supposed to be intimidating, reminding of a predator. The engine could be a detuned version of the latest ZX10R motor which delivers 160.5 bhp.

A new bike/variant by Kawasaki? We will know by November 5th!

A new video was released just two hours ago by Kawasaki TV hinting a big street bike. The video title is “call of the wild” and the date that the bike will break cover is November 5th, just two days before the Eicma motor show in Milan.
Could it be a variant of the Z1000SX? This is the most probable speculation. However a faired or even half faired version of the Z800 should not be exempted. 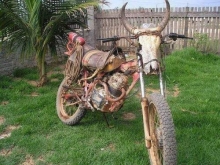