On the 17th October, KTM and CFMOTO officially announced the launch of their cooperation in China with KTMR2R trademark. In answer to many of the media’s questions, Mr. Plöckinger (KTM COO) contributed,“after the Chongqing show, we will immediately open our first dealers in Shanghai and Beijing, and then going into 2014 we will continuously be expanding the dealer network in China. In order to offer a competitive price to the customer in China CFMOTO will import the 200 & 300 DUKE on a CKD basis.” 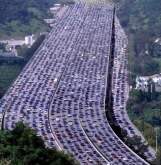