Petal type rotors are featured, a single 260 mm disc brake at the front and a 240 mm rotor at the rear, two piston calipers are used. The ABS is optional. A full face helmet and a small briefcase may be accommodated under the saddle according to Kawasaki.

Compared to the Kymco Dowwntown 300that the J300 is derived, there are many common features. The engine is tuned milder in the case of the J, providing greater torque though.


A new photo of the Kawasaki J300 scooter!

The first official photos and information about the Kawasaki J300 scooter!


Τhe " J " stands for " Jyonetsu " which in Japanese means passion. The European market requires scooters featuring nice design, easy rides, and good reliability. Thus Kawasaki has responded, as there was a gap at the line-up.
At least the engine and frame derive from Kawasaki’s partner Kymco, although probably the scooter has been entirely manufactured by Kymco.
It will be available in European markets at the end of 2013. It is not yet known of it will also be available in USA soon.
The official introduction will take place on November 5th, at the Eicma motor show in Milan.

The scooter has been manufactured in cooperation with Kymco. Does it look like Kymco Downtown 300?

The world as we know it will definitely change if this occurs: Kawasaki is willing to produce a scooter!

Kawasaki is the only manufacturing company among the Japanese four which doesn’t produce scooters. Actually there is one for the Philippines market, called Curve. However a member of the grisoguzzi.it forum in Italy reports that he witnessed the shooting and video action of a scooter featuring Kawasaki J300 logos at Milan, Italy on a closed road.

During this night shooting he was asked not to take any pictures. However the scooter resembles to the Τ-Max, in traditional Kawasaki green/black color and petal type rotors. It seemed to be a final version of the scooter, it was not a pre-production bike, which could mean that it could be presented on the following motor shows, eg the Eicma, in Milan. 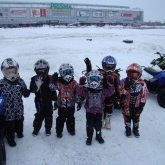